How To Get More Productivity In Your E-Commerce Operations

Parkinson's Law is the adage that "work expands so as to fill the time available for its completion." It is sometimes applied to the growth of bureaucracy in organizations; however, in our opinion, it can also be the root of lower productivity in business functions.

British Naval officer, historian and author of over 60 books, Cyril Northcote Parkinson first published his law in a humorous satirical article in the Economist in 1955. Parkinson meant his article as a critique on the efficiency of public administration and civil service bureaucracy and the continually rising headcount and costs.

What we can learn in operations decades later is that if we aren’t diligent in planning workloads -- measuring productivity and publishing the results to the employees -- then work will expand to fill the time available for its completion. If you don’t have productivity measurement in place at your business, here is a way to experiment with measuring and improving productivity.

An e-commerce retailer client called to ask for advice on how to achieve a higher, consistent rate of picking customer orders. The operations management at this company:

We set to see if the order picking pace could be increased without any loss in quality or increasing error rates. The picking accuracy was 99.97% for the previous month. As we discussed above, if you don’t collect, analyze and use this data for planning, it is going to be very difficult to clear orders daily and meet increasing order levels. Our steps were:

At a high level, sample the productivity in terms of orders, lines and units per hour. This needs to be a broad enough sample of orders, such as four hours in an eight-hour shift. We recorded the productivity and hours worked for the four morning and four afternoon hours of picking. These were staffed by the same 10 people. The results for one day was that the daily average was 1.77 minutes per order; the morning averaged 2.0 minutes per order when workers didn’t know they were being timed, versus the afternoon averaging 1.42 minutes per order when they knew they were being timed.

The percent improvement overall was significant, especially considering the order makeup and the workforce was the same. Of course, the true test of quality and error may not be evident until the customer receives the shipment but with barcoding, there is a much higher degree of accuracy.

Employee feedback. A couple of people were very interested in what we were doing and trying to achieve. We told them we were concerned that the workload seemed to be widely different, the workers said they understood our concerns. Then the management praised them and encouraged them to achieve higher levels without adding people.

Moving forward. Management is going to increase the goals for picking by 8-10% to see if that is achievable without quality slipping and increased errors. Once you’re confident of collecting the data and measuring the productivity, consider taking the reporting to a lower level such as by employee, etc. Set up ways to communicate the productivity daily and weekly with the workers to reinforce the importance of the program.

A natural progression is to consider the layout, and how slotting can improve your picking rate. See our blog “How to Improve Your e-Commerce Warehouse Slotting” to read more on this topic.

We want to emphasize that in no way is the methodology we have discussed comparable to engineered time and motion studies. Engineered studies involve much more statistical data sampling and design; labor management systems, developing an experimental model to be tested; and cost benefit studies to justify the implementation. After implementation, engineered studies must be updated regularly to ratchet up productivity after restudy of the work and performance of individuals is reviewed. Engineered studies are necessary when employees are paid on piecework.

Seeing the immediate increase in productivity and the positive reaction by the employees reminded us of another industrial engineering principle - The Hawthorne Effect. The Hawthorne Effect says that people will modify their behavior simply because they are being observed. The Effect gets its name from one of the most famous industrial experiments that took place at Western Electric's factory in the Hawthorne suburb of Chicago in the late 1920s and early 1930s.

Since December 2017, the unemployment rate has ranged from 4.1 % down to 3.7% in November 2018. If your company is growing fast and you are adding people, make measuring productivity a priority. 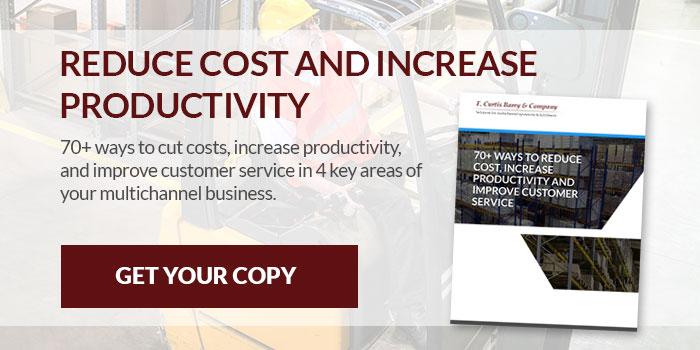